Scout paramotors changed the flying world in 2013 with its debut of the Scout Carbon Paramotor proclaiming itself the "Ultimate handling machine." Today, Scout offers three separate models all with several exclusive, next-level features.

There's two major design features unique to Scout that have always set them apart from others on the market, giving the pilot an intuitive in-flight feel that can be found nowhere else: 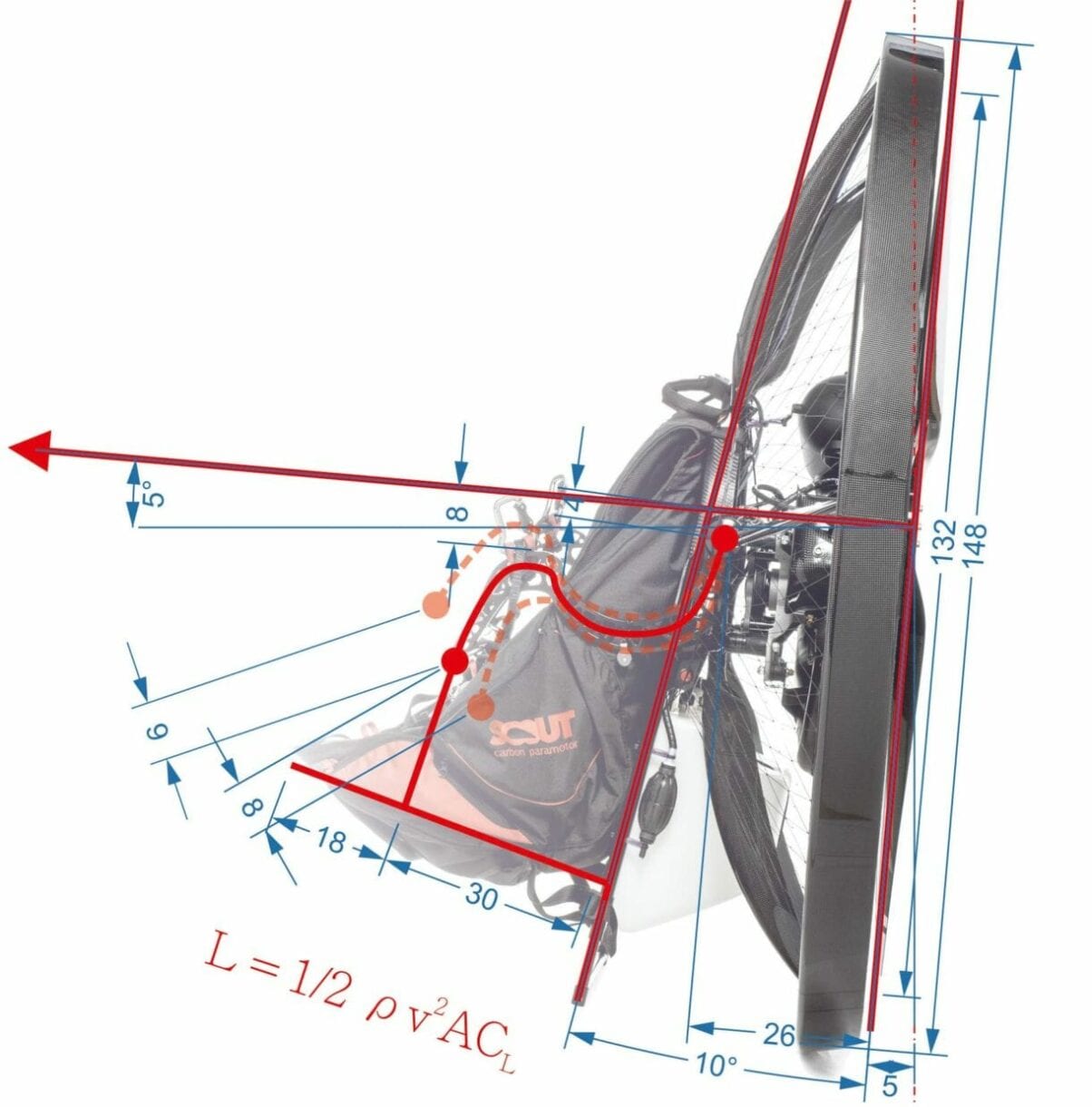 Paramotor "geometry," or more simply put - "design layout" is something that was largely overlooked by manufacturers, professional pilots, and instructors alike for decades prior to the advent of the Scout. Chief designer Miroslav Svec analyzed early in his flying career what paramotor features contributed to different characteristics (favorable and unfavorable) in all the old designs, and optimized the Scout's frame/harness/hangpoint layout to bring a balanced and intuitive in-flight feel. There are several factors that go into the final design, but some of our favorites are:

The Scout team produced an amazing Youtube video series all about paramotor design and technology that helps pilots understand the subtle design features that contribute to the flying characteristics of all paramotors. Check it out here: Insights Into Paramotor Geometry

Second is the method in which the Scout deals with torque. All paramotors have a method of doing so, usually involving mechanical, lateral offset (torque offsets) of the pilot/machine relative to the glider. This has some serious side-effects; namely your machine will always want to turn one way at idle, and the other way at full power. It will be perfectly balanced at a “design RPM” - usually at cruise power. For all other throttle settings, the offsets have variable levels of success but the farther you get from cruise RPM, the worse it feels. This leads to oscillations, over corrections, strange methods and postures for correction, inefficiency of weight shift/turns, having a "strong side" to turn to, and bunch of other mysterious passive inputs that the pilot is unable to discern - yet still has to deal with.

With Dynamic Torque Compensation (DTC), airflow passes over the specially-shaped hand-laid carbon fiber spars, counteracting the effect of torque on the engine at a much wider range of RPM. As thrust/airflow is increased, the anti-torque effect is increased. Of course no system is perfect - on quick accelerations there will be a fleeting "acceleration torque" felt, but the system balances out within seconds. At idle throttle while flying at very fast speeds (on very small sporty gliders), the DTC spars can contribute to a slight turn against the torque, but the range of RPM settings in which torque is balanced is considerably wider than any other unit on the market, including those who have copycat or afterthought DTC systems. Always the top priority - Scout believes that making machines that handle intuitively and are inherently easier to fly helps prevent a huge number of accidents in the sport.

But just in case:

*Hybrid bars do allow greater weight shift, also allowing greater torque. As a result, DTC is not quite as effective and torque-steer is felt. Hybrid Bars are only recommended for advanced pilots who will sacrifice some torque steer for extreme weight-shift.

The Scout "One" Carbon

The O.G. The one that started it all. While the core of Scout Paramotors' technology remains the same in the original Carbon model, there have been many updates and improvements to our favorite paramotor since 2013. Boasting a matte, hand-laid carbon fiber cage, with a robust frame and Enduro Skid support system, the Scout Carbon is the perfect mix of beauty and beast.

Aerodynamic advancements in the cage, coupled with the Advanced Geometry design in the frame/suspension system make the Scout Carbon the most intuitive-feeling paramotor for all the in-flight "feels." This means that whether you enjoy general PPG exploration, cutting-up down low, or high-flying aerobatics, the Scout Carbon is aptly suited to meet your needs.

At its core, the Scout is a pilot's paramotor. You're not just simply siting in a flying lawn chair, or strapping yourself to a butt-fan and pulling brakes. The Scout is different. And once you get some airtime with it - you'll soon find out that it becomes an extension of your body.

Check out this detailed video review by Tucker Gott:

The Scout Enduro is identical to the Scout "One" Carbon in every way except one very distinct difference - the carbon hoop is replaced by a lightweight, durable black-anodized 7075 T6 aluminum outer hoop.

Without adding any weight, the hoop increases rigidity giving a nice buffer if you're just cutting your proverbial paramotor teeth. Aside from the added rigidity, the aluminum cage sections are substantially less expensive to produce. This means that the Enduro is more budget-friendly up-front, and hits your wallet a little softer if you happen to hit the ground a little harder.

The entire hoop with netting costs just $355, so some pilots getting into the sport start out buying an additional Enduro hoop to "learn on" before installing their Carbon cage, after they've gotten their feet under them.

The Enduro is still, at its core, a Scout. Which means it still benefits from Dynamic Torque Compensation and Scout's Advanced Geometry. Think of it as the ultimate handling machine - beginner-style. Pilots who regularly fly carbon Scouts say that the in-flight feel is indiscernible, so in reality you're only sacrificing a little bit of the "sexy-carbon" look when choosing the Enduro for your first Scout. 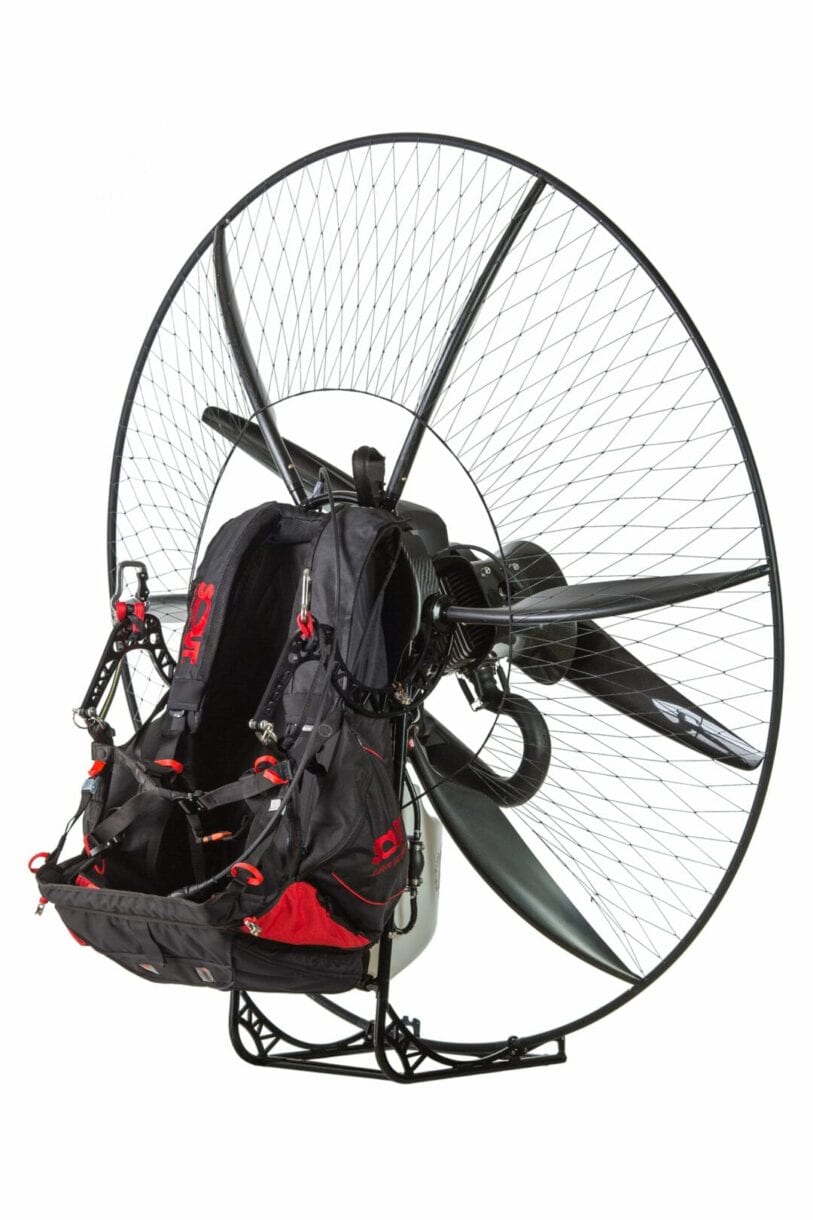 Scout NXT Adventure - Ready for YOUR next adventure!

The NXT is a specialized paramotor that is targeted toward those brave souls who love adventure flying and cross country (XC), but are tired of all of the afterthought-solutions and rigging that they have to come up with in order to tackle XC logistics.

Scout poured its R&D efforts into the NXT for over three years to develop the perfect paramotor for XC/exploration, adventure flying, and vol-biv or "para-camping." As part of that R&D, chief designer Miroslav Svec participated in the 2016 Icarus Trophy from Northern Montana to Southern Nevada.

Our team linked up with Scout in 2017 to explore Iceland and do rugged "field-testing" on the NXT prototypes to further dial-in the concept of the adventure paramotor, and we absolutely loved it!

The NXT brings something entirely new to production-paramotors to handle the bulk and weight of PPG flying, more specifically Adventure Flying while carrying extra weight: 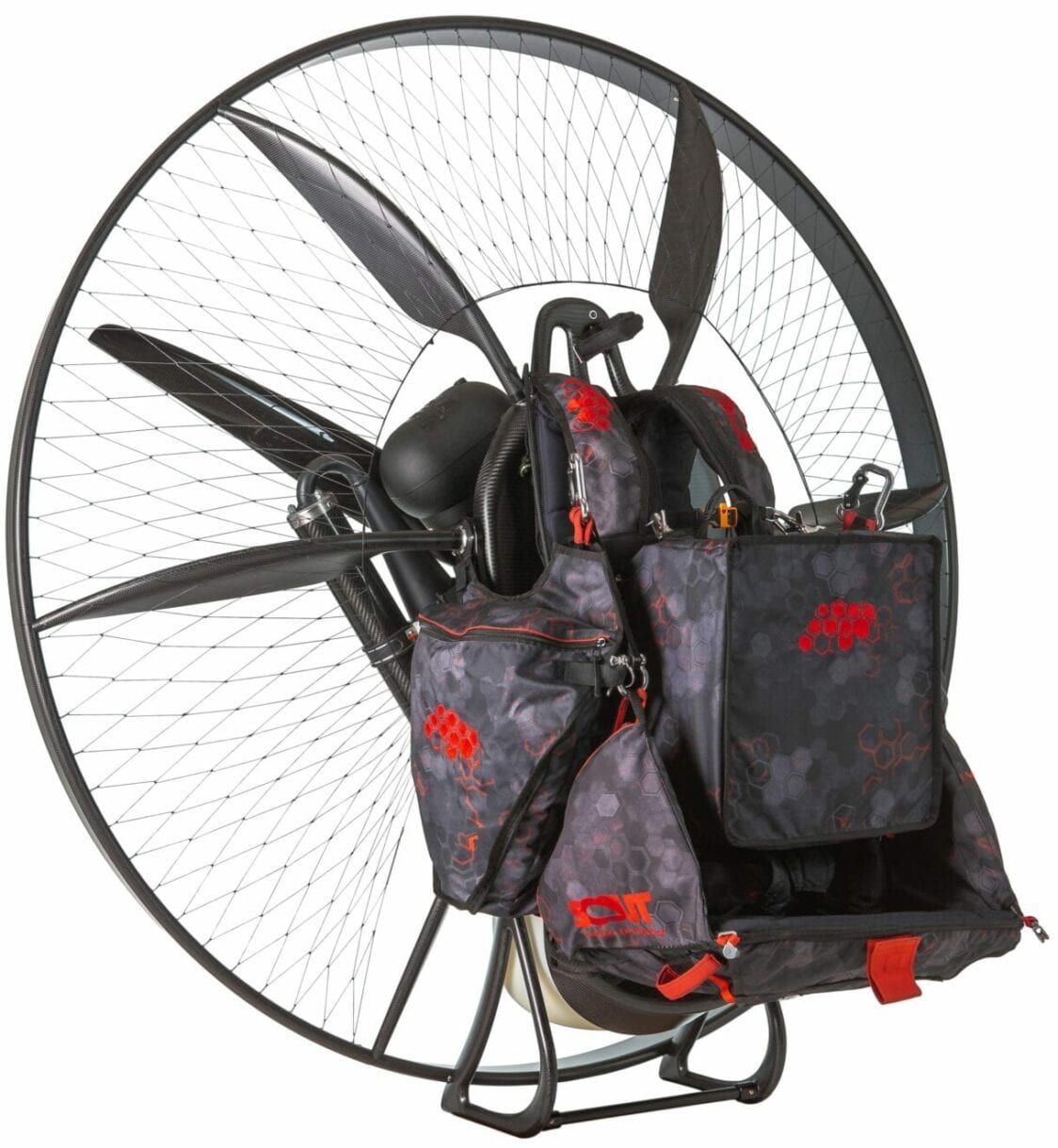 With this new system, the NXT's harness gets the best of climbing and mountaineering backpack technology, combined with a variable-recline angle in the frame. This makes for a perfectly vertical position on the ground resulting in more comfort and maneiverability, without sacrificing optimal flight performance, safety, or comfort.

If you've ever carried a proper "rucksack," you know that placing the load on your hips vs. shoulders makes a huge difference in your ability to maneuver and not lose your breath - that's the design that the NXT harness utilizes to actually make the paramotor easy to carry and launch! With the NXT properly adjusted, it fits like a glove and feels as though you're carrying much less weight. It allows you to run freely, maneuver easier, and look up to see your glider for those all-important before-takeoff checks. When it's time to launch, the seat board folds all the way down allowing a full stride, yet makes getting into the harness as easy as lifting your legs. It truly is the easiest-launching paramotor we've ever experienced.

The NXT is ready for your next Adventure! Aside from an amazing design geometry, it's been outfitted with an industry-leading, proprietary 19L tank (5 US Gallons) giving you an insane fuel range without having to worry about the mess and complexity of external fuel bladders. The fuel tank is custom-molded and mounted as high as it can be, because the higher the load, the lighter it feels.

For the rest of your adventure kit, Scout has designed the Scout Adventure Bags. Customized "pannier" cargo bags with an intuitive storage bag for your chest with a flip-down "instrument panel" to velcro all of your cross-country gadgetry. Check out this video detailing the use of Scout Adventure Bags while exploring Iceland.

The NXT offers additional protection with a molded upper and lower back support, as well as head and neck support.

Is the NXT for me?

While both the Scout One Carbon and Enduro are intuitive and forgiving for beginners, the NXT Adventure is slightly less noob-friendly. It is an advanced paramotor that is designed for pilots who are proficient enough to begin unsupported cross-country flying. This typically means you have more than 1-2 years of experience, you have the ability to launch and land without falling down, and the experience to setup your own harness and fine-tune adjustments.

Not sure if that's you? Give us a call today and we'll get you flying on the right course!